The History of Drones

Drones or unmanned aerial vehicles (UAVs) were initially developed during World War One in the US although the test flights were not successful until after the war had finished. It wasn’t until 1935 when Robert Denny was credited with developing the first remote control plane destined for military use. By the start of WW2, he and his company had won the contract to begin producing remote controlled aerial crafts. The technology for these was transformed by the mid 1990s and from then on drone strikes in combat became common place.

It is worth knowing that it is against the law to fly a drone without passing a test and registering. With the advent of increased air traffic, the government have also had to impose restrictions in and around airfields. These are applied using the airfield’s existing aerodrome traffic zone which has a radius of around two nautical miles and then further zones of five kilometres by one kilometre, starting from the point known as the ‘threshold’ at the end of each of the airfield’s runways. In both zones the exclusion area extends upwards to a height of 2,000 feet above the airfield. Unless you have permission from air traffic control or the airport, you cannot fly in these areas.

With any kind of machine there must be a set of rules or code of conduct for safety reasons. There is guidance around everything from proximity of people to buildings, cars and other aircraft. The drone flying code from the civil aviation authority stipulates:

The scope of drones and how the technology can be utilized for business has really exploded in the last few years. They naturally lend themselves to the roofing and surveying business ensuring safety when areas of great height or vast scope need to be measured. The use of drones means no scaffolding therefore reducing health and safety risks. It quickly became apparent that any industry requiring awkward camera shots such as sporting events and even weddings could also utilize drone footage.

We only use experienced fully qualified and insured drone pilots here at Emzo. We adhere to the strict laws and regulations around drones to capture our footage. It could be you have a large property to sell where you want to showcase both the grounds and the approach if it is set in a picturesque location. We also offer internal drone footage which effectively creates a movie with music that really showcases the interior of a premium property. Drones have come a long way in a century so please do contact us to see what they can do for your property marketing.

See Past The Floral Wallpaper 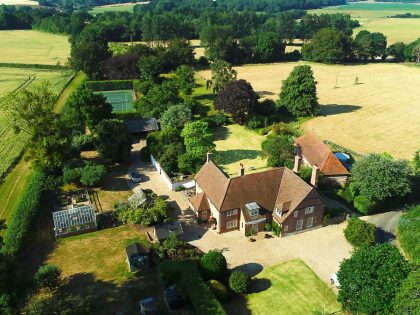